Got Conflict? Find the Speed to Success

Got Conflict? Find the Speed to Success

A problem crops up between a small team within your organization. One person wants to jump on it immediately and seems unable to focus on anything else.  Another member of the team however seems intent on waiting and doesn’t want to discuss or engage about the situation.

Tensions develop between the two. The one who wants action is indignant that the other won’t engage to address the problem. The one who is letting it ride feels unfairly blamed, perhaps even bullied by his counterpart.  Each complains about the other and members of the team start taking sides.  Before long, the personality clash becomes a minefield, distracting everyone from the work that needs to be done. 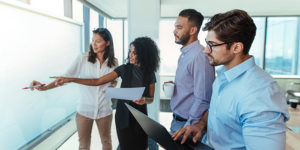 Such clashes occur when confrontational and avoidant personalities face problems together.  The more stressful the problem or situation, the more polarizing their behaviors will seem.  Under ordinary circumstances, people vary their approach depending on the situation.  They may directly address one problem yet defer another to someone else or choose to ignore it completely.  However, under stress, these same people will gravitate toward one end or the other of the problem-approach spectrum.

Those with a conflict-confrontational personality are likely to obsess over the problem.  When a problem hits their radar, it nags at them, begging for a response. They are unable to let it go until it is resolved.  In the traditional fight or flight response to danger (or stress), their response is fight.  Their need for an instant solution though can be short-sighted, as it may lead to quick, stopgap decisions instead of reaching the best long-term solution.

Those with conflict-avoidant personalities are pulled in the opposite direction.  They tend to wait and observe the problem – pondering solutions and the necessity of action.  Their fight or flight response is flight.  Their halted response however, allows the problem to intensify and may yield earlier options for resolution obsolete or ineffective.

The Spectrum In Between

The key to dealing with these extreme personality types is in recognizing that’s what they are: extreme ends of a full spectrum.  Within the spectrum though, we find a wide range of essential tools for successful problem-solving, even when the parties involved have differing tendencies.

Ultimately, different ends of the spectrum are complementary rather than mutually exclusive. They bring a larger array of tools together to solve problems: the patient consideration of details on one end, and the push for results on the other. The more you can create a balance that helps your employees see the value that all styles across the spectrum offer, the better your organization can incorporate the benefits of both approaches.

Much conflict in organizations – such as the clash of extremes described above – is avoidable. When you’re immersed in the day-to-day tasks needed to run your part of your organization, though, recognizing and dealing with the pitfalls that can cause those avoidable conflicts is not always obvious.

We specialize in developing strong teams and leaders – and supporting conflict awareness and understanding is one of our favorite approaches.  Let us know if we can help your teams learn to effectively apply all the available problem-solving tools they possess.  We aim, to keep your organization running its best.