How to Avoid Your Very Own Mutiny

How to Avoid Your Very Own Mutiny 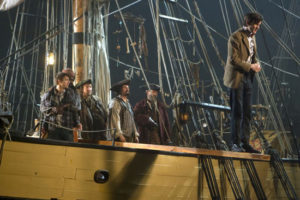 Too often, leaders ignore conflicts and hope they will miraculously go away. Others, by contrast, jump right into the middle of them, believing their role as the leader is to serve as a go-between in all complaints and disagreements. They establish an “open-door policy” to help the team feel heard and understood. Being helpful in this way sounds good, but, in reality, trying to solve everybody’s problems is less likely to result in solving them than in everyone seeing the leader as part of the problem. That’s when the real trouble begins.

Once that happens, the leader’s role as impartial arbiter is compromised. Each side views the leader as being on the other side. Dissatisfaction festers, rumors fly, and what may have been a simple misunderstanding can escalate into an even bigger crisis.

A leader’s role in conflict

Consider the captain of a 19th century sailing vessel. He (perhaps she!) held a key role in ensuring safe travel to the ship’s destination. More than anyone else on the vessel, the captain was responsible for keeping that destination in mind. The crew focused on the many tasks that kept the ship moving day-to-day, but the captain alone kept his eyes on the horizon.

That means he couldn’t put himself in the middle of day-to-day tasks; he counted on the crew to do those. Certainly, if crew members didn’t work together effectively, he would take action, but not in the way that leaders in modern organizations try to do it.

Can you picture a 19th century ship captain with a modern “open door policy”? “Come on in and tell me your problem. I’ll talk to the other person and we’ll work it all out.” Not a chance! There’d be mutiny after mutiny.

Granted, many of the problem-solving strategies of a 19th century captain wouldn’t be appropriate for our organizations today (walking the plank has been outlawed in several states), but the fact remains that you don’t solve people’s problems by stepping squarely into the middle of them.

The key to solving people’s conflicts

Successful leaders steer people to solve their own problems. You can learn more about that in my video blog Stop Bothering Me and Let Me Get Back to Work. Or, better yet, watch the second installment of my webinar series on “The Dynamics of Conflict – The Impact of Leadership.” We’ll dive deep into the topic of safe and productive ways to navigate around conflict rather than getting drawn into it.

In either case, keep your focus on the destination. Don’t get drawn into the disruptions on deck. Help your people work out their conflicts in productive ways and you’ll experience much smoother sailing. And if you need a hand at how to do this, I’d be very happy to help.